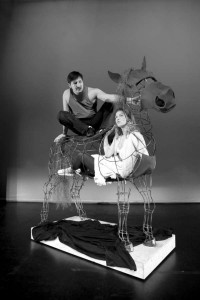 […] Connell’s a playwright with a good sense of how to ground stranger worlds than ours in very human emotions, and it’s in good hands on just about every level of production. As it works through its cycle, Hroses proves an intelligent, compassionate work, skillfully acted by Hansen and Elter. Grounded in performance, the script manages to feel personal in even its more abstract moments, or the movement-based storytelling, choreographed by Amber Borotsik that hints at the future. The beauty of the horse is ultimately metaphorical, but its given a shapely steel design by Tessa Stamp, allowing the actors something beautiful and strange to interact with.

The extreme declarations made by the lovers play out with humour, perhaps more than could be expected; some, certainly is built into passion as blind as this, where lover’s ideas can seem silly from the outside. But even if the tone occasionally seems askew, the production sells that earnestly. Like the relationship at its core, Hroses creates an entire world of its own, and what makes it work is that, at its core, it’s grounded in the simple, universal troubles of the heart: boy and girl meet, then a harsher reality sinks in.