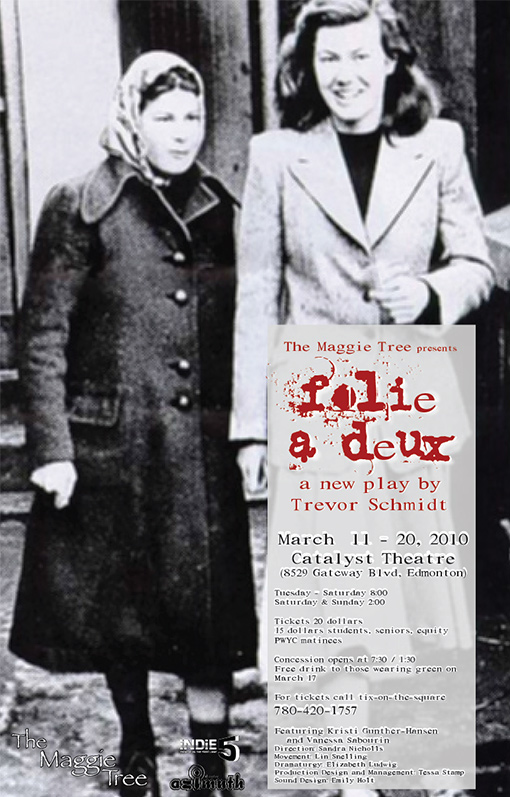 Inspired by the true story of the Parker-Hulme murder in 1954 (which also inspired the movie Heavenly Creatures), Folie à Deux is a story about two women who meet secretly in contravention of the terms of their prison sentences. Juliet is now a famous mystery novelist in England and Paulina runs a children’s riding school in Scotland. The present moment of this meeting and their dark history is interwoven throughout the play.

Juliet and Paulina first meet as young girls in Christchurch, New Zealand. Needing each other’s affection and companionship, the girls quickly form a friendship stronger than the bonds of reality and morality. Together they build an imaginary world in which power, death, and romance rule supreme, without the restrictions of remorse or lawful consequence. In this world they can aspire to be anyone they wish and to explore their developing sexualities without the fear of judgment. Forced by external circumstances, the girls develop a shared delusional disorder as they plunge further into their created reality. When threatened with permanent separation, they plot and complete the brutal ‘moider’ of Pauline’s mother.

They are convicted of the murder and sentenced to five years in separate correctional institutions with a major stipulation that they are never to be in contact with each other again. Folie à Deux explores the fictional meeting between these two women 20 years after their crime. What do two people who once clung so desperately to each other and felt such passion together say after years of isolation and repentance?

Funded by the Alberta Foundation for the Arts