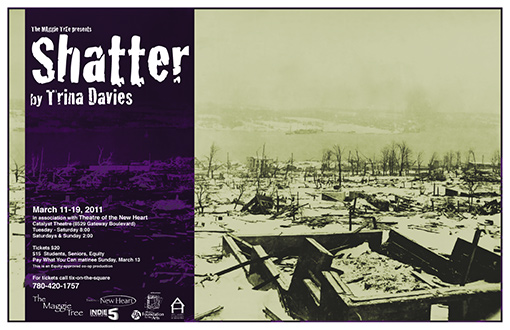 Shatter explores the little-known details of the aftermath of the Halifax Explosion of 1917, the world’s largest man-made explosion prior to Hiroshima.  Halifax is growing rapidly from the proceeds of World War I while Anna MacLean, a teenager, ripe with the promise of youth, is flush with excitement at all of the handsome soldiers in the streets.  Though Anna’s mother and her German Canadian best friend, Elsie Schultz, talk of the war, Anna can only think about whether the young man enforcing the blackout order thought she was pretty.  The next morning, their world collapses.  Two thousand dead, hundreds injured and blinded, and many more homeless.  As a community tries to find someone to blame, four people search through the rubble for something to hold on to. Lyrical and shockingly relevant to a contemporary world, Shatter is an examination of the dynamics of fear that prevail in the aftermath of a catastrophic event.

Funded by the Alberta Foundation for the Arts

Sponsored by Theatre of the New Heart & The Old Cycle Building